The Best Kind of Blue

Not the kind of dumpy, sad “feeling blue” blue…..

Not the blue that looks best on me or the blue I’ve chosen for a painting project….

So many times in 2013 the kids and I have felt the blues.

Diabetes and the end of a relationship where 4 kids were involved just really wreaked havoc on our emotions.

Yesterday we were feeling a new kind of blue. 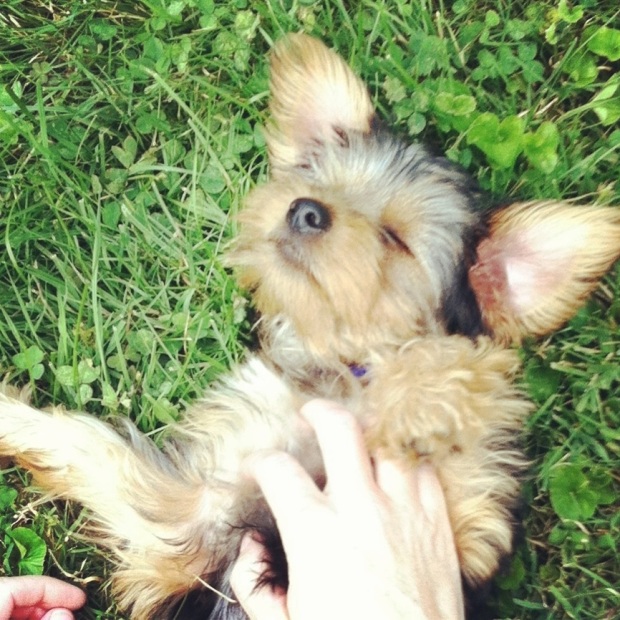 Ian has been negotiating, bargaining, sweet-talking, begging, and giving me puppy dog eyes for the last few weeks. He had been even sending pics of puppies to Dee and coaching her to show them to me. (He originally asked for a dog back in the winter shortly after he was diagnosed and it killed me to say no, because I wanted to give him the world after his life was turned upside down).

Dee, the cool and quiet one, took a somewhat different approach and hung out with us a little more often when the topic was being forced. (I’ve noticed that as she enters 8th grade she prefers to hang out in her room a lot more.)

So in the end, after a lot of reading on my part and sending them links to read on their iPods (educational summer reading)…

After considering my options, making phone calls, weighing pros and cons and evaluating our life….

We met and brought home Blue.

I wish we could take credit for the name. It was what he’d been called the last three months. When I asked why (the other puppies were named Chaos and Alexander) she said,
“He was wearing a blue collar.”

And as we drove home with him we were able to make just about any song on the radio about Blue.

The rest of the night it just made sense…we bought a blue leash and collar, Ian drank blue G2 at a picnic, and chose a blue cupcake for dessert.

Each time he would proclaim with his eyes bright, “For Blue!”

When we returned home from the staff picnic it became official: He was Blue.

I think it was meant to be!

"We build too many walls and not enough bridges." - Isaac Newton

Most Accessed Posts in the Past 2 Days